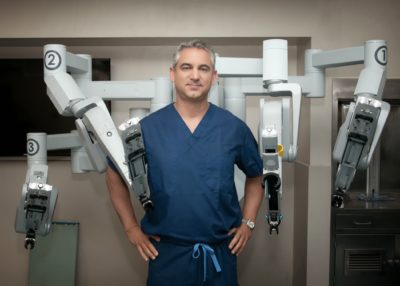 Dr. Samadi is certified by the American Board of Urology. He frequently sees patients suffering from BPH, urinary tract infections, kidney stones, erectile dysfunction, prostatitis and other diseases of the urinary tract. As a urologic oncologist and robotic surgeon, he specializes in the diagnosis and treatment of prostate cancer, bladder cancer, kidney cancer, using the daVinci robotic prostatectomy.

Dr. Samadi has seen and treated thousands of patients and frequently lectures and trains other urologists on the use of the da Vinci® robotic surgical system.  This revolutionary technology combines the increased accuracy of robotic movement with the surgeon’s experience and attention to detail. It magnifies the surgical field significantly and gives surgeons greater visualization, dexterity and precision during surgery.

Dr. Samadi is unique in that he is one of very few urologic Oncologic surgeons in the United States trained in all three primary areas of surgery: open, laparoscopic and robotic.

From July 2019, Dr. David B. Samadi has been affiliated with the St. Francis Hospital in Roslyn, New York, as Director of Men’s Health. Here is where dr. Samadi treats his patients with the latest technology, in a safe and clean environment, surrounded by a team of professionals, ranging from nurses and medical assistants to anesthesiologists, radiologists and more.

Professor of oncology and medical author

David Samadi is also an international lecturer and has written many publications, including articles in Urologic Oncology, the Journal of the Society of Laparoscopic Surgeons, Journal of Robotic Surgery, and the World Journal of Urology.

Additionally, Dr. Samadi is a member of the American Urologic Association and the American Medical Association. He did his Residency in General Surgery from Montefiore Medical Center in 1996 and Urology from Albert Einstein College of Medicine in 2000. He did his Fellowship in Urology Oncology from Memorial Sloan-Kettering Cancer Center in 2001 and Laparoscopic & Robotic Surgery from Henri Mondor Hospital, France in 2002. He completed M.D from S.U.N.Y., Stony Brook School of Medicine, Stony Brook, New York in 1994.

Dr. Samadi has been featured in Forbes Magazine, Connecticut’s cable news channel, Cable News 12, and his articles have been published in many medical journals. He was recognized in the Best Doctors issue of New York Magazine in 2009.

In addition to his career as a doctor, he was the host of Sunday Housecall on Fox News Channel and has worked for the channel for five years. Later on, he continued the series of interviews with famous doctors on his Youtube channel, Robotic Oncology. He has launched a radio program on am970, World Health News, as well as a website to blog about health news and prostate cancer: prostatecancer911.com