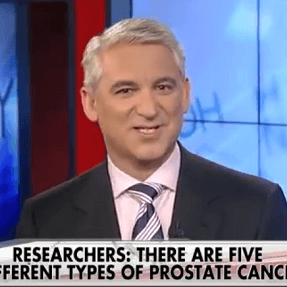 Dr. David B. Samadi explains in an interview with Fox News that there are genetic tests available to predict the progression and aggressiveness of prostate cancer.

The latest research on the genetics of prostate cancer

Fox News Interviewer – Scientists in Great Britain’s cancer Research Centre say that they’ve identified for the very first time that there are actually five different types of prostate cancer. Dr. Siegel, this is pretty stunning! I mean you think prostate cancer is prostate cancer, and that’s all.

Dr. Siegel – This is very important research and I want to start by saying what is cancer because I think people out there know what it is. But do you know that cancer is genetically based? The DNA in the cell or the genes of the cell are what’s called the blueprint. It tells your body what to do. When the blueprints go off you can get cancer and then your cells start to grow at a high speed and take over the body like the tumors you know about. Now we’re being able to study genetics. When things go wrong we are being able to figure out which are the worst ones, which have the most mistakes, which of the genes in your cell have the most mistakes causing the worst cancers. When I send a patient that dr. Samadi, they want to know not just if they need to have the prostate cancer out but also what’s the worst one, which is the one they need out the most, which is the one they need out the least, which one can they not have out.

Up until now, it’s been very very hard to predict that. Now a urologist expert may be able to say to his patients in the near future: You know what? This one you can wait on, this one I better get out right away.

Fox News Interviewer – Can you really wait on prostate cancer?

Dr. David B. Samadi – Well, there are some prostate cancers that are slow-growing but I think that a lot of times when using this close surveillance we have to be careful with this. Now with the new genetic testings, we’ll be able to distinguish which one really has aggressive prostate cancer and which one does not. The message to a lot of people out there who may have prostate cancer is to see the expert in this particular field because not every urologist may deal with prostate cancer etc.

There are 230,000 new cases of prostate cancer and 30,000 men still die from this. Our job is to prevent and distinguish who should be treated and who should not. In our Center in Manhattan, we have a lot of these tests.

Fox News Interviewer – Do you do genetic testing at your Center?

Dr. David B. Samadi – That’s right! We have 4 K tests, we have a lot of Oncotype DX, which is based on genetic testings, we have Prolaris test which helps discover who should really get more biopsies or not, who has aggressive prostate cancer or not. This precision medicine is a beautiful part of what we do every day to tell somebody: “I’m gonna follow you with MRIs etc and you need an operation fairly soon”. These advances can save lives, which is a game changer!

Fox News Interviewer – So, what should you tell your doctor if you got prostate cancer right now?  Do patients need to ask for a DNA test?

Dr. Siegel – Well, I think you, as a patient, would consider it! But I would add to David’s point and I love his point about precision medicine because that is the future. What’s good for one person is not good for another person. We need more studies on genetic testing to tell us exactly which genes need monitoring. This is a great study but it’s only in 250 men. I want to see it in a thousand men.

Fox News Interviewer –  Can you go right now to your doctor to ask for this genetic test?

Dr. Siegel –  You can go to your doctor and ask for this, but as time goes on, we’re gonna have more and more information that will help us decide what is in the early stages.

Fox News Interviewer – What should people ask for?

Dr. David B. Samadi –  Look, Eric, I think there’s no specific test today, but what you can ask for 4k test, you can take Prostate Health Index. These are the collection of a lot of different tests. But the old-fashioned way of treating this was elevated PSA meant biopsy and biopsy meant surgery and radiation and they may have had complications even though in the hands of experienced people you would do well. Today we have a lot of other tools that we would look at and we add all of these tests.

There’s a urine test called PCA3 tests that looks at special cells of cancer in urine and then, even if your biopsy is negative, we can get something called confirm MDX to find out if you have cancer.

Dr. Siegel –  David isn’t it true also that MRI helps target that part of cancer that might have the most of these abnormalities?

Dr. David B. Samadi –  That’s another good point that Mark is bringing up. Not only we’re using genetic tests but we’re also using images and imaging studies to find out if there’s an area that lights up on MRI. In our Center in Manhattan, we have something called MRI fusion where you take ultrasound pictures and MRIs and you put them together and find out where you should focus. It is almost like a GPS. It will tell you: this is the area you should concentrate on.

Fox News Interviewer – Well, you know, this is fascinating. Just listening to you, doctors, talk about this it makes me think that if I were to take a male patient I would say: Know what? Guys,  it’s okay! Don’t be afraid to get testing because it’s not necessarily a death sentence! So get tested! get tested as early as possible!

Dr. Siegel – It is a death sentence if you do not get tested early.

Fox News Interviewer – Exactly! And I know that Dr. Samadi, you help people as well dr. Siegel. But, of course, this is Dr. David Samadi’s expertise and you have a website, prostatecancer911.com and people all over the country, all over the world can tap into.

Dr. David B. Samadi –  Yes! I’m glad you put it up. For a lot of people who have or are just newly diagnosed with prostate cancer – don’t panic! This particular site is the way that we give medical-based information not only to Fox News viewers but to a lot of people who don’t know what to do, who may think: “I’m diagnosed with prostate cancer I need help”.  We’re putting our time and effort as a way to give back and it’s a pleasure to do this. They can come to prostatecancer911.com and we’ve been able to save many lives.

Mark has also been extremely instrumental in his practice for screening detection and it’s a great collaboration and has worked out tremendously well.

Dr. Siegel – To know when the patient needs to see Dr. David Samadi.

Fox News Interviewer – Very good! And do not forget about the 4k tests. However, you have to get your PSA test. I mean you know that’s really important.  We’ll talk about that next week.