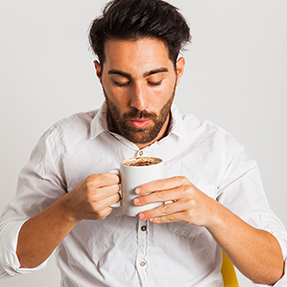 Does caffeine benefit men with ED?

Caffeine – it’s either beloved or maligned, it seems. However, many studies have found this natural stimulant found in coffee, tea, and cacao plants, has numerous health benefits. Consuming caffeine is considered safe even though it can be habit-forming for some. Besides an energy boost, caffeine may also help you live longer, process glucose better, enhance athletic performance, and make you less likely to develop heart failure, Parkinson’s, and possibly Alzheimer’s. And now, even men with erectile dysfunction (ED) may benefit too.

Erectile dysfunction is very common, affecting around 30 million men in the U.S.  The first time any man experiences ED can be a moment of complete humiliation and devastation. The ability to perform sexually is a great source of pride for men and why ED can be so embarrassing.

The prevalence of ED increases as men age. Age is considered the strongest variable associated with ED. But, that doesn’t mean that ED is considered normal.

Other common causes of ED include:

While there may be some benefits as a bedroom booster, caffeine is not to be considered an elixir for ED – in other words, don’t rely on a daily caffeine drip to solve your ED.   Men have several choices for treating ED, in addition to caffeine, which include the following:

The main issue leading to the inability of a man to achieve an erection is reduced blood flow to the penis that is necessary for men to get an erection sufficient for sexual intercourse.

Every day, millions worldwide wake up to a warm cup of coffee.  That early morning cup of caffeinated coffee naturally stimulates the central nervous system, triggering a burst of energy and alertness at the start of a new day. As a result, people worldwide rely on caffeine found in coffee to boost nergy and consume it regularly.

Besides boosting energy levels, how does caffeine benefit men with ED? Here’s a look at the mechanics behind caffeine’s ability to stimulate blood flow to the penis:

Even if caffeine’s effect on ED is minimal, drinking coffee still is a healthy beverage for most men. Since numerous vitamins and minerals exist in this beverage, along with antioxidants fighting off serious diseases, caffeine used in moderation (up to 3 cups of coffee a day) can be used safely by most men.

However, some men may be extra sensitive to caffeine and its side effects when over-consumed. The FDA advises refraining from consuming more than 3 cups of coffee daily to avoid side effects. These side effects may include:

What about energy drinks and ED?

Even though energy drinks enjoy immense popularity, men should also avoid sugary energy drinks altogether. Excess sugar or creams in energy drinks (even sugared-up coffee) can add weight gain that increases ED. The best way to get the energy flow from a caffeinated beverage is to choose no-sugar beverages, good for your waistline and your health.

Also, stop drinking all caffeinated beverages early in the day, ideally by noon for a good night’s sleep. Caffeine is a stimulant that can disrupt sleep which may affect getting and keeping an erection.

Men, who consume energy drinks daily in large amounts, should be aware that long-term consumption of these beverages can lead to:

The best advice for men with ED is to consult with their doctor for advice on a safe caffeine amount for them. While caffeine used in moderation in non-caloric beverages may help ED, finding the underlying cause and treating it will be the most helpful long-term.