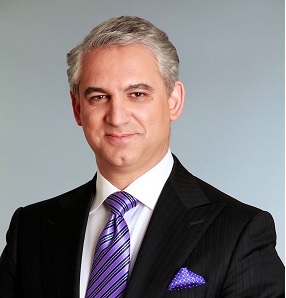 Dr. David Samadi on insurance, healthcare and the importance of a surgeon’s experience

Dr. David Samadi discusses the importance of a surgeon’s expertise, wether he is an open, laparoscopic or robotic surgeon, when choosing a doctor for prostate cancer treatment. In the interview below, they also address healthcare issues related to the robotic surgery not being covered by some insurances. The consequences can prove to be devastating for men in areas that do not have excellence centers of treatment.

Mark Siegel: The craft side of society, not the high powered science side, not the research side, but the craft side of Industry technicians, people that are technically skilled, is being overlooked right now in the United States and the compliment I want to pay you is that I firmly believe not only do you have a big background in surgery and in oncology, but you’re a craftsman with the robot. Do you think that that’s the most important fact that’s being overlooked right now?

David Samadi: Part of the things that I tell my patient is that, while we do robotic surgery, you have to be a human being, you have to have a big heart, you have to be compassionate about what you do. And it’s true that I’m on call for my patients 24 hours seven days a week.

Mark Siegel: You also made a point, by the way, a very important point about operating rooms that our people, our viewers should know, which is there’s a lot of surgeons out there that set up six operating rooms at once and go from one to the other, but you concentrate on one case at a time.

David Samadi: Absolutely. That’s what the patients want. Every one of my patients they know that I’m there a hundred percent, I make the skin incision and I’m there when I close it and I do the entire case. That’s very critical and I think when we talk about some of these technologies, you can’t be as a surgeon just a technician. That’s not what the patient wants. They want that personal touch. Behind these prostates there are wives, their spouses, their children, there’s a lot of emotion involved, so don’t tell me that in six years you can do 3,500 cases and you can do six cases a day and you can have good quality. The data has to be registered.

We need to look at the research, we need to look at three things: continence, sexual function and cancer cure rate. That’s what the patients want. And they want 100% focus of the surgeon, before, during and after. That’s why I’m not a big fan of having fellows see my patients before and after and coming for 15-20 minutes of fame. I don’t think that’s good medicine and what that does is, it opens the door for criticism from the open surgeons or laparoscopic surgeons. Bottom line, what it comes down to whether you’re an excellent open surgeon, or you’re an excellent laparoscopic surgeon, or a robotic surgeon, the outcome and evidence-based medicine is what we’re looking for. If you’re good at it, that’s where you should go.

I always tell my patients that, if you have an experienced open surgeon and you have the average robotic surgeon, don’t take a chance. Go for open surgery. If you have the experience robotic surgeon and they really have gone through oncology training, laparoscopic training, and they use the robot as a tool. only as a tool, as a microscope with a big light, that can give you extra things that we didn’t have in open surgery. That’s where I will go, because I don’t think there’s any reason to open someone up, to go through all that blood loss. The tactile feedback or the touch factor is gone, because now you can see what you’re doing, but ultimately it’s the technique and the style of the surgeon and what he does in the operating room that the patients are looking for.

Mark Siegel: By the way, there are voices that seem to be implying that robotic prostate surgery, which is done in 85% of the cases right now, is a very expensive surgery, that is basically unproven. It feels like there’s a political agenda there, to reduce the use of the most expensive technologies in the direction of a one-size-fits-all solution, which would be in keeping with health reform or the direction of health reform. They should state that flat-out in the article, but they hide it, and we feel, as experts in this, that the article is inaccurate. In that way, would you also describe for people what exactly robotic prostate surgery is and then answer the question of what you feel was wrong about that article?

David Samadi: Robotic surgery involves using the da Vinci robot and it’s a remote control surgery. The surgeon sits about eight to ten feet away from the patient and, after you put in the trocars or the keyhole opening, and you connect the robot, now you can do the rest of the operation from remote control, ten feet away. Now, why are we doing this? Because you have 10 to 15 times magnification, whereas in laparoscopy, we had 7 times magnification and in open surgery we had only two-and-a-half times magnification with the loop, so that’s a major advantage. Second is because there’s no blood in the field. You don’t have to put your hands there anymore. 75% of the patients that come and see us with prostate cancer are what we call the T1C or a smooth or no nodules. There’s nothing to touch and the risk of infection is lower, of course, to the surgeon and to the patient, because you’re not opening up and the risk of infection is much less.

Now having said that, when you don’t have any blood in the field and you can see you have absolutely no reason to have your hands there, in fact, your hands can block your view of your operation. It’s not good enough to be either/or, it’s important to have all expertise in one head. I’ll tell you why: in open surgery, as retropubic prostatectomy, you go from the tip of the prostate, all the way to the base of the prostate, at the bladder. In robotic surgery, you go from the base of the prostate, to the tip of the prostate, so it’s almost reversed. And what makes this transition is to really have the laparoscopic skills. When you have all of that it makes a lot of sense. What I liked about the article is that they talked about the surgeon who was doing laparoscopic prostatectomy. Now, laparoscopic prostatectomy involves surgeon being next to the patient, using long laparoscopic instruments, just like the way we took the gallbladder to do the surgery.

This laparoscopic surgeon went to do robotic surgery and he realized that his outcome wasn’t that great and he went back. And I admired that, because ultimately, as a surgeon, you have to be honest with yourself first. Am I getting the right outcome? We have a lot of open surgeons right now in the field, that are panicking, because the number of their prostate cancer cases are going down and they’re jumping on this technology and no one will give them any credit. If you’re going to do a good open surgery and now you’re converting it into a nine-hour robotic prostatectomy, that doesn’t make any sense

Mark Siegel: You’ve told the story about that, that I’m not sure you can repeat on the air ,of an example of someone who did just that. Who went from being an OK open surgeon and tried to become a robotic surgeon and made a disaster out of it. And that’s just the kind of person that pads the statististics that end up in the Journal of the American Medical Association.

David Samadi: As a surgeon, you have to stick your gun and do what you’re really good at. And the patients are going to find you. You know, today we have many educated consumers. I’m not worried about those, because they’re gonna find their way through the right system and to the right doctor. I’m concerned about the ones that they really don’t know about what’s going on in the field, they feel like there’s a robot next to them, small hospitals are buying them without having a trained surgeons, the company has the monopoly and they’re pushing these robots in even small hospitals and that’s when we’re going to have complications and issues. If you’re diagnosed with prostate cancer, what do you really need to know is do diligent work, make sure you get second opinion. Look at the surgeon and find out if he has fellowship training in oncology, in laparoscopy and has done enough volume. The volume of the cases that they have done: is it really his volume or is it something they did in you know residency or fellowship that doesn’t count

Mark Siegel: I’m going to ask you a very tough question right now. I want to translate this whole thing over to health reform. What do we do in the future? You have robots, they’re expensive, they cost over a million dollars. A setting like Mount Sinai Medical Center can spend 20 million, get you in there, get all the the best care there. But in other words, you have a great setup and you’re a great surgeon. You know we can’t put that in the major medical centers around the country. So, I have two questions related to health reform: What do you do in a in podunk hospital in North Dakota, number one, and number two, if you have a one-size-fits-all insurance, that’s low quality: like expanding Medicaid, like an HMO style. Is it going to cover the robot and, if not, is the robot gonna become extinct before its time?

David Samadi: Well the question is where is this health care reform and if the future means that we’re not going to cover these procedures? If you want PSA screening for your prostate, we don’t think it really adds much to longevity, go ahead pay for it, but we’re not going to cover it. The robotic surgery – go pay for it. I think that would not be fair to the people who can’t really afford this and they should take advantage of it.

I’m concerned if a patient is diagnosed, let’s say, in South Dakota, he doesn’t have access to this kind of expertise. What is he going to do? I think that robotic surgery should not be done just because you can, just because you can take a weekend course or practice on someone and you just say take the prostate out. That’s really meaningless.

Mark Siegel: But how you’re gonna decide what insurance should cover? It should cover David Samadi’s procedure, but is it gonna cover everyone that’s doing robotics?

David Samadi: Well, I think what’s going to pan out is that there would be few centers of excellence that are doing a large enough number of cases. They can prove that their data is absolutely proven and patients have to fly in and be able to get that kind of expertise. The rest of the country, over time, has to follow the same kind of pattern. It’s not just about the robot, you need to have a team, you need to have expertise, you need to have volume and you need to be the type of surgeon who really is there, a hundred and fifty percent for your patients. Then you have the center of excellence.

Mark Siegel: David, thanks for coming on. I want to end with an email about you “the doctor understands something very basic: health care is first the treatment of people and their families. Understanding of the soul, as well as the body, is very important”.